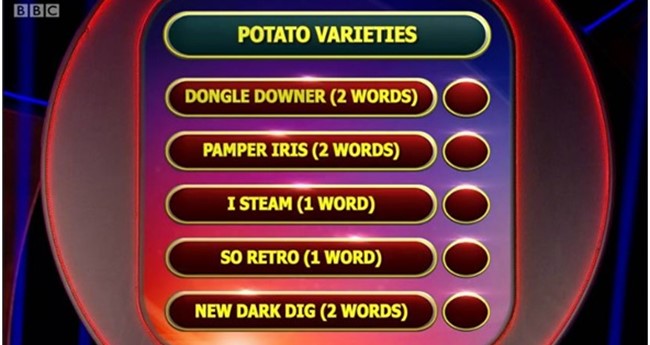 Are you a fan of BBC’s Pointless? If so, a keen eye might have spotted a recent episode putting contestants’ potato knowledge to the test – ‘mashed up’ anagram style!

On the show, hosts Alexander Armstrong and Richard Osman tasked the two teams with naming potato varieties, by unscrambling five anagrams and attempting to guess the most obscure answer. The correct answer was the variety which no one gave in a survey of 100 people from around the UK. This was the “pointless” answer and gave the contestants extra money for the grand jackpot.

Go on, have a go, how many can you name!? Join the conversation on @TastyPotatoes #morethanabitontheside

Did you guess right? The correct answers are: